Certified Advanced Practioner by the Academy of Professional Family Mediators

Bruce Matez is widely recognized as one of the top and most well-respected divorce and family law mediators and lawyers in Southern New Jersey. Bruce has over 30 years of experience handling all types of family law matters, including, but not limited to, divorce (including complex divorce litigation), custody and parenting time (visitation), child support, alimony/spousal support, adoption, domestic violence, equitable distribution of marital property, equitable allocation of marital debt, child abuse and neglect (formerly DYFS, now called the DCP&P) matters, and same sex Civil Unions and Domestic Partnerships. He has substantial experience in preparing and negotiating pre-marital and cohabitation agreements and divorce settlement agreements.

The main focus of Bruce’s current practice involves mediating divorces and other family law disputes for divorcing couples, those experiencing post-divorce disputes, parents involved in custody and parenting time disputes, and others. He has been mediating for over 25 years and is often appointed by the court or chosen by his colleagues to mediate or arbitrate divorces and family law issues. As a mediator, Bruce is recognized for his ability to help parties resolve disputes in a non-adversarial, mutual problem-solving, respectful, manner using creativity and “outside-the-box” solutions. As an attorney and mediator, Bruce focuses on assuring that his clients are well educated in the law relating to their own case, and making sure his clients reach a comfort level to be able to move forward with their lives and realize their personal goals, without significantly negatively impacting themselves and their families financially and emotionally.  Clients truly value not just his years of experience, but his ability to understand the convergence of their financial, personal, and emotional issues. He conducts mediations in person at his office in Cherry Hill and via Zoom, which offers clients from throughout New Jersey and those living in other states to utilize his mediation skills and talents.

As an alternative to litigation through the court (a trial), mediation, and the collaborative divorce process, Bruce is also often appointed as an arbitrator for divorce and family law disputes, and has been appointed by the court and chosen by colleagues to serve as a Parenting Coordinator and a Guardian ad Litem for children who are embroiled in a custody or parenting time dispute between their parents.

Bruce was a founding member of the Thomas S. Forkin Family Law American Inn of Court.  He served on the Executive Committee from 1997-2009 and now is a Master Emeritus. In June 2018, The Inn of Court presented Bruce with the Honorable Joseph M. Nardi, Jr Award. This prestigious award is presented to a member of the South Jersey family law community whose commitment to the practice of law encourages and exemplifies civility, humility, compassion and a moral/ethical obligation to the welfare of children and families, in general and is further evidenced by participation in continuing legal education, whether formally or informally, and a willingness to act as an advisor/mentor to less experienced attorneys.

Recognizing the value of community, philanthropy, education, and volunteerism, Bruce has been an active member and a leader of Congregation M’kor Shalom in Cherry Hill, NJ, where he has served on the Board of Trustees from 2006 until 2021, Financial Secretary, and President from 2012-2015. He taught religious school for 18 years and chaperoned the annual Confirmation Class (10th grade) Israel trip 10 times. For 10 years, he served on the Board of Directors, as Secretary, and Vice President of The Starting Point of New Jersey, a non-profit education, referral, and resource center for individuals and families seeking support for mental wellness, personal growth and recovery. Bruce also has been an avid participant in local community theater for many years, both on and behind the stage.

Having experienced divorce himself, and having raised a son after divorce, Bruce is proud and grateful to have maintained healthy and caring relationship with his son’s mother and her husband.

AV Rated Martindale Hubbell “AV Preeminent® is a significant rating accomplishment – a testament to the fact that a lawyer’s peers rank him or her at the highest level of professional excellence.”

Recognized by SJ Magazine as a “Top Attorney” for many years, as one of the “Super Lawyers” by Thomson Reuters, and as an Awesome Attorney by South Jersey Magazine, which recognizes 185 attorneys in 42 specialties who were chosen by readers as South Jersey’s top legal professionals. 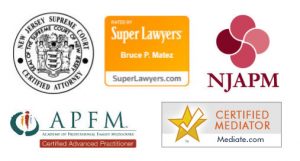 2000 – Supreme Court of the United States of America

1989 – United States District Court for the District of New Jersey